Roanoke County and the City of Salem received a grant from the Virginia Department of Transportation to complete the section of the Roanoke River Greenway proposed between Green Hill Park in western Roanoke County and Mill Lane in the City of Salem. In collaboration with the Roanoke Valley Greenway Commission, staff from each locality are in the preliminary stages of identifying a greenway route that will provide an important link in a regional greenway system (see conceptual plan for the Roanoke River Greenway).

In November 2011, Roanoke County utilized the grant funding to secure a contract for professional engineering services with AECOM Technical Services, Inc. for the development and evaluation of conceptual greenway routes. The project study area will include all land within the area extending 0.5 mile north and south of the Roanoke River, the existing trailhead of the Roanoke River Greenway in Green Hill Park to the west, and Riverside Park in Salem to the east. The project will be phased as follows:


- Phase I:development and evaluation of conceptual greenway alternatives to provide connectivity to existing/proposed adjacent greenways to both the east and west. Alternatives will consider potential impacts, constructability, and available funding. Once greenway alternatives have been identified, public meetings will be held for the public to review and provide input on the proposed alternative routes. The deliverable for Phase I will be the selection of a preferred alternative for which construction documents will be developed during Phase II.

- Phase III: bidding and construction of the greenway.

For additional information, please contact the Roanoke County Department of Parks, Recreation & Tourism by email roanokeriverwest@roanokecountyva.gov, or phone at (540) 387-6078 extension 0. Learn more about Roanoke Valley Greenways at www.Greenways.org. Please check back to this website for future project updates.

- Has a greenway route been determined?

o Not at this time. Roanoke County has entered a contract with AECOM for professional engineering services to identify and evaluate potential greenway routes within the study area.

- What is the time frame for selecting a greenway route?


o It is anticipated that a preferred greenway route (Phase I) will be determined during the summer of 2012.

- Will AECOM, or their subcontractors, be conducting field work on private property?

- When will the greenway be constructed?

o Construction of the greenway will commence during Phase III. The anticipated time frame for completion of Phases II and III is 18-24 months (December 2013-June 2014).

- What section of the greenway is currently under construction along West Riverside Road in the City of Salem?

o The City of Salem is currently constructing a portion of the Roanoke River Greenway identified as Section 3A that will connect Riverside Park to the Moyer Complex.

- What is the proposed length and width of the greenway?

o Similar to existing sections of the Roanoke River Greenway located in the Cities of Roanoke and Salem, as well as the Town of Vinton, the proposed greenway is anticipated to be ten (10) feet in width with a paved surface. The length of the proposed greenway is undetermined at this time, as it will vary depending upon the final greenway route. Once constructed, this section of the greenway will provide a link between 17 miles of greenways either completed or under construction.

- What is the cost of the greenway?

o The total projects costs of the western section of the greenway have not been determined. Determination of a final greenway route, environmental permitting, plan preparation, right-of-way negotiations, and construction will all factor into the final project costs.

Map of the Greenway Within Green HIll Park 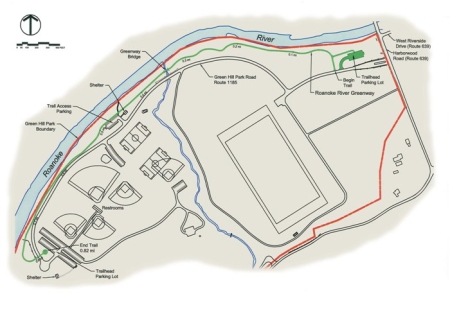